William C. Bushell, PhD, the Director of Research at ISHAR, has been researching mind-body phenomena for over three decades, focusing on the field of consciousness studies around the world as a biological, medical, and psychological anthropologist affiliated with Columbia, Harvard, and MIT.

“Mind-body” and “consciousness-universe” terms are used below to refer to the fields of mind-body healing; optimal health and optimal functioning; human capacities for regeneration, retardation and reversal of the effects of aging; the potential achievement of longevity through extension of the life span and health span; and the achievement of enhanced sensory-perceptual capacities; all of which are fields that Bushell has played a leading role in within academia. He has linked his training in these anthropological subfields to high level research in medicine, human biology, neuroscience, physics, cosmology, and mathematics. His work in these subjects has been published in leading journals, books, and reference volumes, as well as being presented at major scientific and scholarly venues around the world.

Bushell began his research career focused on these subjects with a commitment to both academic (scientific, scholarly) rigor and open-mindedness. These are the main principles of ISHAR, of which he is now Director of Research and Academic Liaisons, while Bushell also maintains his research position in Biophysical Anthropology at MIT and is affiliated with the Department of Religion at Columbia. After initially pursuing a solid foundation in the philosophy and history of science as an undergraduate, Bushell chose to approach mind-body and consciousness science through a cross cultural (anthropological) and multidisciplinary framework, and he obtained the BA at Columbia Phi Beta Kappa, Magna Cum Laud, with Departmental Honors in Anthropology, in addition to other awards. He then obtained his MA, Master of Philosophy, and PhD at Columbia as a Fulbright Scholar with Honors from the National Science Foundation, the Social Science Research Council, and the Explorers Club/World Center for Exploration, conducting research in mind-body and consciousness science in Africa, India, with Native Americans, and in the Afro-Caribbean diaspora, among many other cultural traditions.

Dr. Bushell, from his undergraduate period up to the present, has consistently brought the highest level of scientific and scholarly rigor to his growing conviction that human potential in the mind-body and “consciousness-universe” (see below) domains is surpasses what has been recognized in Western science, scholarship, and popular belief. His work has focused on researching the extent of human potential in these areas while observing the strictest standards, and has also sought to work with the thought leaders in this set of frontier fields.

These have included (see below) successful collaborations with Professor Robert Thurman, HH the Dalai Lama, Novera Herbert Spector, Lawrence Sullivan, Deepak Chopra, and many others. Bushell chose anthropology as his scientific and scholarly discipline and “vehicle”, because it is one of the few disciplines that bridges hard sciences with psychological/neuroscience and with art/myth/language/belief/”spirituality,” as well as physics, cosmology, and mathematics. The success of the bridging is best judged by the quality and level of publications and presentations (including venues for both), and Dr. Bushell’s ability to meet the highest level of standards appears to be supported by this set of metrics.

Dr. Bushell has authored, and coauthored with distinguished scientists and scholars, in such scientific journals as the Annals of the New York Academy of Sciences (within the top 2% of scientific journals worldwide), the Cleveland Clinic Journal of Medicine, Developmental Brain Research, Mount Sinai Journal of Medicine: A Journal of Translational and Personalized Medicine, and others; his papers on these subjects such as meditation and yoga have also been published in leading books and reference volumes, including The Oxford University Reference Series, Asceticism (1995); and in a number of conference and symposia proceedings such as the Cold Spring Harbor Laboratory Symposia in Quantitative Biology, 2008: The Control and Regulation of Stem Cells  (poster); The Fourth International Stromboli Conference on Aging and Cancer 2005; Towards a Science of Consciousness, Aula Magna Hall, Stockholm 2011 (two paper abstracts); and others.

Dr. Bushell has presented his work, including research and scientific models at such academic venues as Harvard, Yale, Columbia, MIT, Cornell, the Salk Institute, the Cleveland Clinic, Cold Spring Harbor Laboratories, the Society for Neuroscience, the noted International Stromboli Conferences on Aging and Cancer, Beth Israel Medical Center at the Albert Einstein College of Medicine, Aula Magna Hall at Stockholm University, the University of California Berkeley, and many others.

Concerning his choice of anthropology as a discipline and means of study, important to him was the fact that anthropology allows training and access to the world’s cultures outside the modern/contemporary West. Many of these cultures have valued and developed a deeper, broader, and more cultivated knowledge of accessing such human potentials – the same potentials which are now being “rediscovered” in the West, through the pioneering efforts of Thurman, Blackburn, HH the Dalai Lama, Chopra, and others. Hence, Bushell sought to study under and train with leading scholars and scientists in a broad multidisciplinary spectrum of relevance to this dimension of human potentials within the mind-body and “consciousness-universe” domains.

Bringing the Fruits to ISHAR: Seeking Out the Historic Leaders in Relevant Fields of Scholarship

From his early days as an undergraduate, Bushell sought to learn from the pioneers and historic figures in the spectrum of relevant fields of inquiry. Hence, he chose to study anthropology, and to pursue that study at the historic, highly ranked Department of Anthropology at Columbia University. Columbia started the very first modern department of anthropology by hiring as founding Chair Franz Boas, who is also recognized to be the founder of the discipline of anthropology and cross cultural studies. Boas and Columbia in fact influenced many if not most anthropologists of the 20th century, including AL Kroeber, Ruth Benedict, Margaret Mead, Melville Herskovits, and his protégé Claude Levi-Strauss, who in turn was a central figure in spurring the development of much of the contemporary cosmopolitan intellectual universe, through his development of structuralism and its subsequent enlarged field of post-modernist thinking across the board. While many of these historic figures were of course deceased or no longer affiliated with the Department when Bushell entered as a student, he was able to benefit from the first and second generation of influences directly within the Department, with numerous Columbia faculty who had studied with these historic figures.

While at Columbia Bushell was able to study with one of the leading pioneering historic figures in comparative folklore, Theodor Gaster. Gaster was the student and editor of Sir James George Frazer, one of the original comparative folkorists, who in the 19th century began to reveal archetypal motifs that were found all over the world, which demonstrated aspects and dimensions of a common denominator in the human mind and culture. Frazer’s discoveries and his work and the work of Theodor Gaster and his father, the scholar Moses Gaster, were among the extremely important factors which shaped modern and post-modern thinking and understanding of psychology, religion, myth, and consciousness, profoundly influencing Western thinkers, including Jung, Freud, Levi-Strauss, James, and many others.

Bushell also studied with Professor Ewert Cousins, Professor of Religion at Columbia and Fordham, who is widely considered one of the founders of the field of comparative mysticism. Cousins also originated the idea for, and edited, the Classics of Western Spirituality, and was also the general editor of the 25-volume series World Spirituality: An Encyclopedic History of the Religious Quest.

At Columbia, Bushell sought out and began a student/mentor and collaborative relationship with Professor Robert Thurman, one of the foremost experts on Tibetan Buddhism, and one of the closest friends, advisors, and collaborators with HH the Dalai Lama, both of whom are among the 20th century’s foremost figures in the field of cross cultural and integrative science-religion research and study. Dr. Bushell has had a 25 year collaborative relationship with Professor Thurman, and through him has co-designed and co-directed two major integrative science conferences with HH the Dalai Lama. 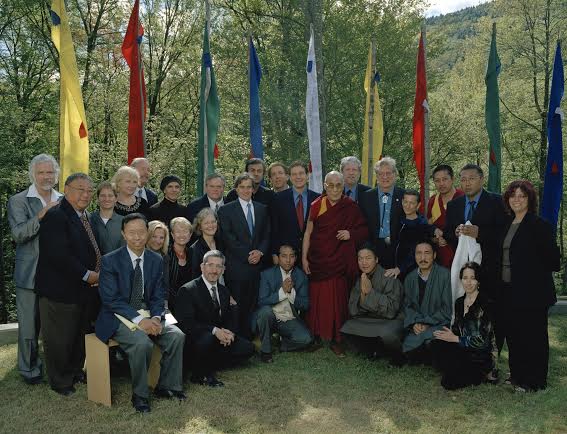 After obtaining his two Master’s Degrees and PhD with honors at Columbia, Dr. Bushell went on to take a postdoctoral position at Harvard’s world-leading Center for the Study of World Religions. There he worked closely with the then Director, Professor Lawrence Sullivan, who was the editor of the Encyclopedia of World Religions along with the founder of the field of comparative religion, Mircea Eliade, who founded the one of the first Departments devoted to the study of comparative religion, at the University of Chicago. Sullivan recognized the seminal importance of Dr. Bushell’s work in demonstrating the radical importance of religious or spiritual practices such as meditation in enhancing health, including the immune system, and Sullivan, who was also then the newly elected President of the American Academy of Religion, praised Bushell’s pioneering integrative work in his inaugural address to the Academy, published in the Journal of the American Academy of Religion (66/1: 1-11, 1998).